The archive below contains the anonymised version of the dataset used in our ICDCS 2012 paper Geology: Modular Georecommendation In Gossip-Based Social Networks. The paper contains the detail of how the dataset was obtained, and the archive describes its structure. Also, feel free to contact us (francois.taiani@irisa.fr) if you have any additional questions.

Once you've uncompressed the archive you can use any json parser to access it. For instance in ruby (with the relevent gems "json" and "zlib" installed):

Frequencies from an array in ruby

Thunderbird's User Interface uses tiny fonts by default, too tiny for my eyes. To increase Thunderbird's default UI font size, just put a file called userChrome.css in the 'chrome' directory in your profile (on Mac your profile is found in ~/Library/Thunderbird/Profiles/<some weird string>.default/, you might have to create the 'chrome' directory if it's not there), with the right kind of css code. Here is the one I'm using. 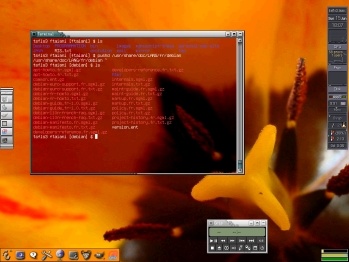 Here are some very valuable resources I used to install GNU/Linux Debian (Sarge) on an Apple PowerBook G3 Wallstreet.

To get the text console and XFree86-4 work on my PowerBook I use the following kernel args in BootX: video=atyfb:vmode:14,cmode:15 with "No Video Driver" unchecked. (My video card is identified as ATI 3D Rage LT Pro (rev dc) by lspci.)

In /etc/X11/XF86Config-4 the most tricky part was to remove the "Modes" line of the "Display" subsection.

Note that you normally don't want to use my XF86Config-4 file directly, as it also contains options for the Apple French keyboard. If you do have a French keyboard, you probably can use this file as such, but you'll need to install the keyboard symbol mapping file /etc/X11/xkb/symbols/fr-shapiro-new from Marc Shapiro as the /etc/X11/xkb/symbols/fr shipped with Debian is currently broken. (See Debian Bug report #157170 for more details.)

The beautiful background image you can see on the above screen-shot was taken by my brother. If you want to use it as a wallpaper too you can get it here.